The first idea for this project was developed in view of the growing ressentiments against Europe, and the growing influence of right-populist ideas in many European countries. Values like freedom, democracy, and respecting human rights form the basis of the European Union. In political decision-making processes and in current media reports, they unfortunately are getting ever less prominent. Instead the focus moves to problems and crises. The situation at the external border of the EU, the arrival of thousands of refugees, and finally the Brexit referendum opened up new perspectives on European values and stimulated discussions about democracy. Especially now, in the current debates, it is important for the perspectives and opinions of the younger generation to be heard. It will be them, who have to live with today’s decision for the longest.

Since 2008, IBB e.V. successfully realises the ewoca³ project, where youths from different European countries collaborate in international workcamps and deal woth topics of sustainable development. The intercultural work with young people in Europe has shown youths to be actually very interested in participation and political processes. The study “Unsichtbares Politikprogramm” [Invisible policy programme] (Calmbach, Borgstedt, Levermann) and the 17th Shell youth study (Albert, Hurrelmann, Quenzel) strongly confirm our experiences in international youth work. Youths do deal with current political topics and want to participate in fashioning the world around them. Politicians also often wish for young people to partipate more, and for them to be more politically active. Political programmes for independent youth politics are realised, and, again and again, campaigns are trying to motivate young people to participate. However, communication between both sides and the realisation of common activities is often not working. “Pimp my Europe” starts here, connecting political decision-makers and and young, motivated people.

What exactly happens in this project?

In three introductory events, youths from four local groups in North Rhine-Westphalia will discuss with each other. Together they will deal with several different value-laden topics, closely connected to European identity. The first event in November deals with human rights, the second in December will focus on democracy in general, the third dialogue in January will see the working groups dealing with the topic of European citizenship.

At a youth conference, the results of the local dialogues are then collected, presented, and discussed with the whole group. For this, representatives on the State and Federal level are invited to participate in the discussion and, together with the youths, to develop ideas on what could be further steps. In small working groups, youths and politicians come into dialogue, in order to get to know one another and exchange ideas. In the end, a media product should be created, presenting the results to be made available to other youths and politicians. The concrete form will be decided on collaboratively and in a participatory way. The final product will be produced at an event specifically dedicated to this, where youths and media pedagogic support personnel will work together on presenting their impressions and results in a youth-appropriate way.

The projekt “Pimp my Europe” also takes place at the same time in Italy. The Italian youths deal with the same questions and discuss them with political representatives as well. Using an internet blog, the youths in both countries can exchange ideas regarding the process and results of their work. A follow-up event to the first project phase will thus be a European youth conference in Brussels, where youths can exchange their results and raise the discussion to the European level. Youths from further European countrieswill be able to participate.

“Pimp my Europe” wants to motivate for collaboration on political processes, each in their own language. Only if we all work together can the grand project of Europe be rejuvinated, refreshed, and made to further the idea of living together in peace and solidarity, and of understanding diversity as strength. “Pimp my Europe” is a symbol for a young and motivated Europe, where young citizens and political decision-makers develop their vision collaboratively.

10th of December and 14th/15th of January
Working groups regarding human rights, democracy, and European citizenship 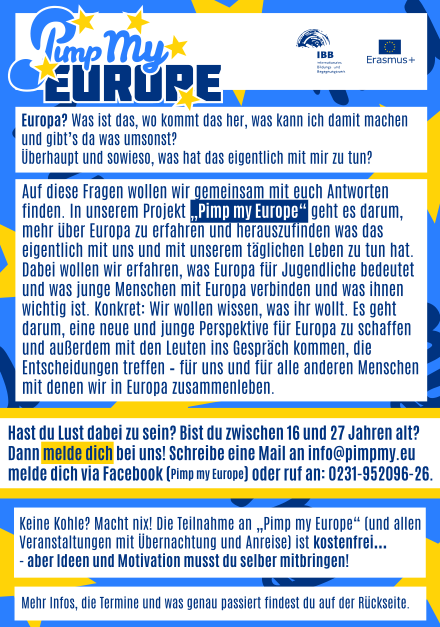